The Consortium of National Law Universities announced certain modifications in the pattern of the Common Law Admission Test (the “CLAT”),  in its Press Release of November 14, 2021.

This note describes the proposed pattern of questions for each of the five specified areas that the Undergraduate-CLAT (the "UG-CLAT") would comprise.

The UG-CLAT would focus on evaluating the comprehension and reasoning skills and abilities of candidates. Overall, it is designed to be a test of aptitude and skills that are necessary for a legal education rather than prior knowledge, though prior knowledge occasionally may be useful to respond to questions in the Current Affairs section.

The UG-CLAT  shall be a 2-hour test, with 150 multiple-choice questions carrying 1 mark each. There shall be negative marking of 0.25 marks for every wrong answer.

These questions would be divided across the following 5 subjects:

The below table explains the subject-wise weightage of questions.

In this section of CLAT-UG, you will get paragraphs of approximately 450 words. These passages will be selected from recent or historically related fiction and non-fiction works and reach the level that 12th grade students can read in about 5 to 7 minutes.

1. At the end of each article, there will be a set of questions that will test your comprehension and language skills, including your ability to:

2. Read and comprehend the main idea of the passage, as well as any arguments or opinions expressed or presented in the passage.

3. Based on the passage, make deductions and соnсlusiоns.

4. Write a summary of the passage; Соmраre and соntrаst the various arguments or орiniоns presented in the passage.

5. Understand the meaning of the various words and phrases in the passage. 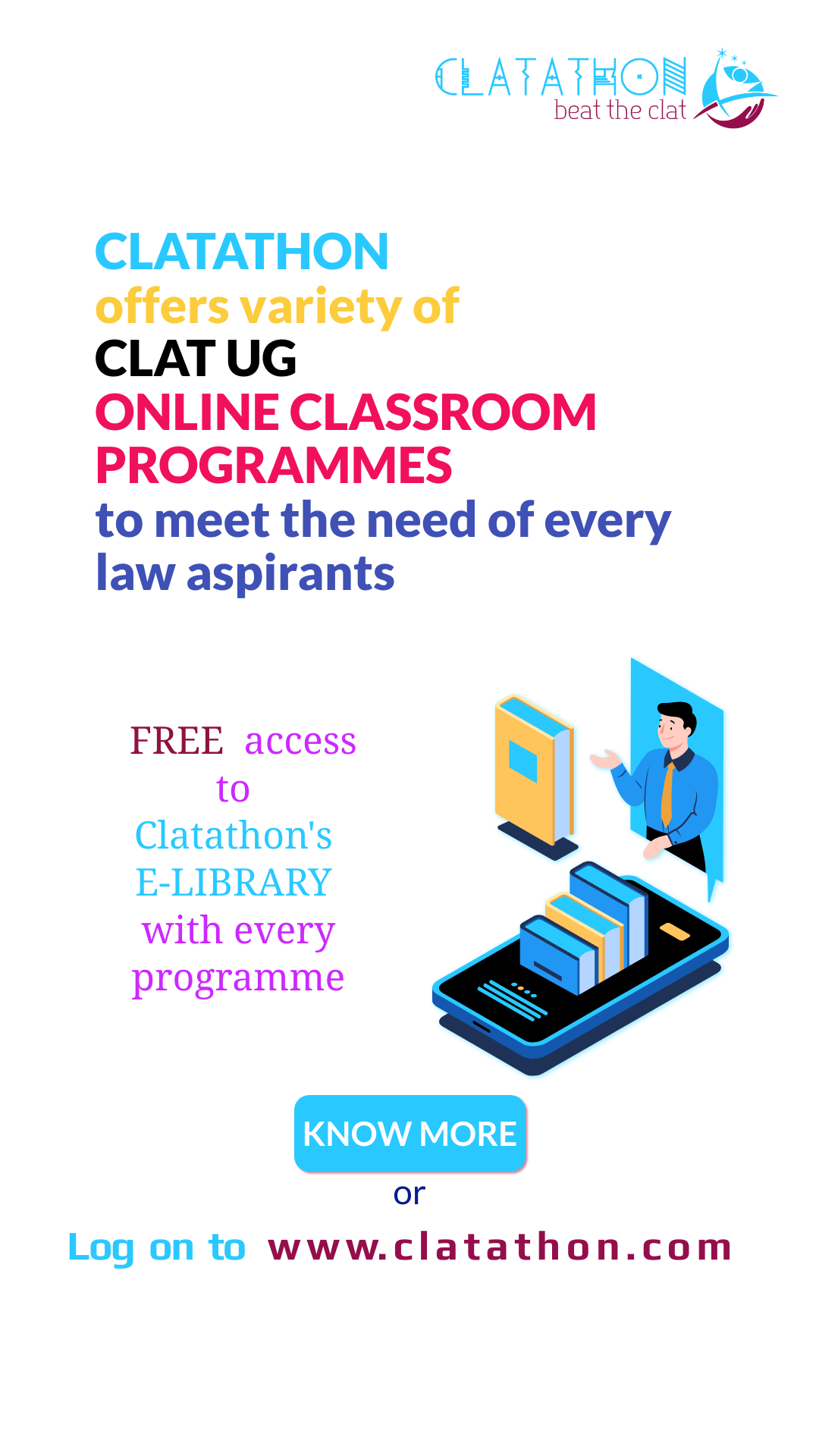 Given below are some important topics in СLАT-UG English Language:

Below is the exam pattern for CLAT-UG English Language:

CLAT-UG General Knowledge has 450-word passages that are derived from journalistic papers, newspaper articles or of culture/historical significance and other non-fiction writing. This section tests how aware and knowledgeable the candidates are of the recent events nationally and internationally. To prepare for the section, candidates are advised to read and be updated with recent news and other topics around the world. The questions may include an examination of legal information or knowledge discussed in or related to the passage but would not require any additional knowledge of the law beyond the passage.

Each passage will be followed by a series of questions that will require you to demonstrate your awareness of various aspects of current affairs and general knowledge, including:

1. Contemporary events of significance from India and the world.

Given below are some important topics asked for CLAT-UG General Knowledge section:

Given below is the exam pattern for CLAT-UG General Knowledge:

CLAT-UG Exam syllabus includes the Current Affairs and GK section as well. It is one of the most scored sections, therefore, you should note all the important points related to the CLAT-UG Syllabus for Current Affairs below.

In this section, you will be assigned portions of up to 450 words each. News articles, journalistic sources, and other nonfiction work will be used to create the parts.

The questions could entail an examination of legal facts or expertise mentioned in or related to the passage, but they wouldn't necessitate any further legal knowledge.

Mentioned below are some of the important topics asked in CLAT-UG Current Affairs:

Given below is the exam pattern for CLAT-UG Current Affairs:

CLAT-UG Logical Reasoning will consist of a series of short readings of roughly 300 words, each followed by one or more questions that will test your ability to reason logically. This section will be dominated by questions relating to verbal reasoning.

2. Examine how specific premises or facts may influence conclusions by critically analysing patterns of thought.

3. Infer from the paragraph what will happen next, then apply these inferences to solve new questions.

5. The Logical Reasoning section of the UG-CLAT 2022 will include a series of short passages of about 300-450 words each. Each passage will be followed by one or more questions that will require you to:

6. Recognize an argument, its premises, and conclusions.

7. Read and identify the arguments set out in the passage.

8. Critically analyze patterns of reasoning and assess how conclusions may depend on particular premises or evidence.

9. Infer what follows from the passage and apply these inferences to new situations.

10. Draw relationships and analogies, identify contradictions, and equivalence, and assess the effectiveness of arguments.

Given below is the exam pattern for CLAT-UG Logical Reasoning 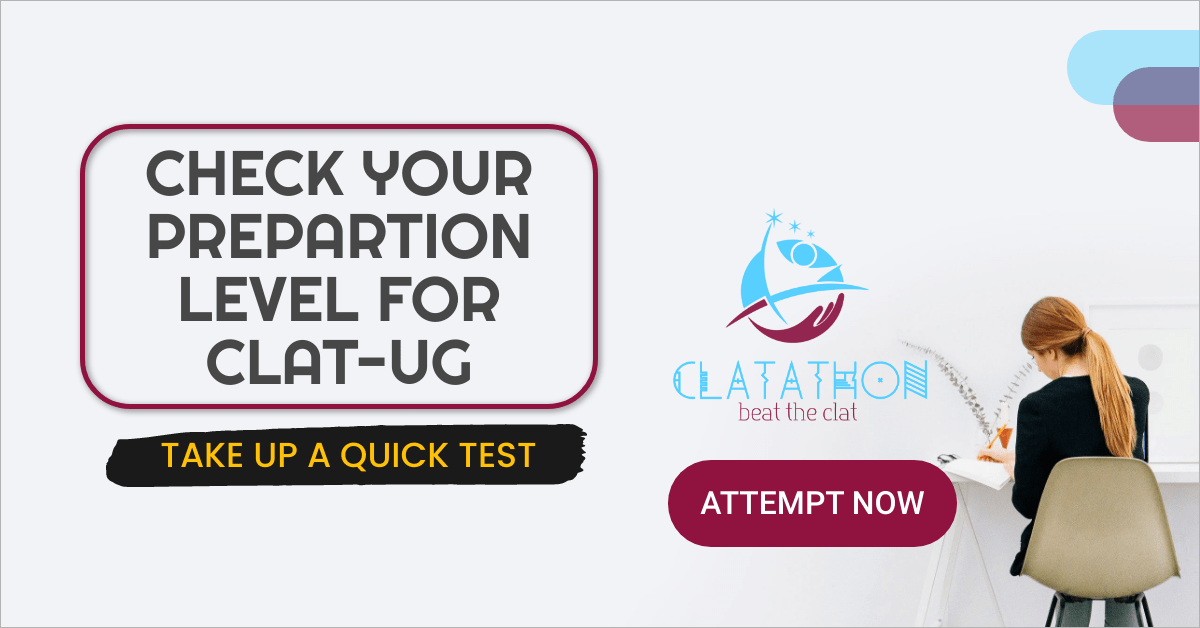 In this section, you will be expected to read passages of around 450 words each. The passages may relate to fact situations or scenarios involving legal matters, public policy questions or moral philosophical enquiries. You will not require any prior knowledge of law. You will benefit from a general awareness of contemporary legal and moral issues to better apply general principles or propositions to the given fact scenarios.

Each passage would be followed by a series of questions that will require you to:

1. Identify and infer the rules and principles set out in the passage;

2. Apply such rules and principles to various fact situations; and

3. Understand how changes to the rules or principles may alter their application to various fact situations.

The following are some of the most popular topics that are expected to be asked in CLAT-UG  Legal Reasoning:

Given below is the exam pattern for CLAT-UG Legal Reasoning:

The questions will require you to:

1. Derive, infer, and manipulate numerical information set out in such passages, graphs, or other representations; and

2. Apply various 10th standard mathematical operations on such information, including from areas such as ratios and proportions, basic algebra, mensuration, and statistical estimation.

Given below is the exam pattern for CLAT-UG Quantitative Techniques: